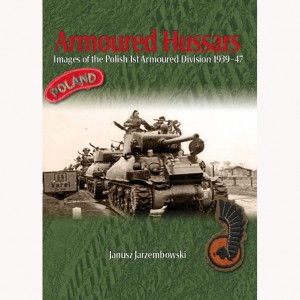 â€¢ This album is a tribute to the gallant men of the Polish 1st Armoured Division, who fought from the beginning to the very end of World War II. This wonderful album is a brilliant pictorial history of the 1st Polish Armoured Division composed of about 250 photographs, documents and publications largely collected by WO1 Alexander Leon ‘Manka’ Jarzembowski, a veteran of 2nd Armoured Regiment, as he soldiered for Poland between 1917-1949. The collection lay in albums unseen for decades until recent interest in the Division and its Commanding Officer, General Stanislaw Maczek, caused Jarzembowski’s son, Jan, to revisit his father’s archive in order to provide a narrative for the almost forgotten Division and for his father’s memory. The photographs themselves cover the period from 1939 and the invasion of Poland before moving onto the French Campaign of 1940; the bulk of the images illustrate the story of the Division from arriving in the UK in 1940, reforming in 1942 and then its campaigns in North-West Europe 1944-45 – its pursuit of the Germans across northern France, Belgium and Holland, and finally into Germany. Included are some of the final Divisional parades prior to disbandment in 1947. There are also many interesting photographs of dignitaries who visited and inspected the Division thorough out those years, including General Sikorski. The range of images available in this album is wide and impressive with many excellent shots of uniforms, equipment and armour, which not only provide an aid to historians and veteran’s families, but, expertly annotated by the author, are of great value to military modellers as reference material. This album is a tribute to the gallant men of the Polish 1st Armoured Division. General Maczek and his men fought the Second World War from the very beginning to the very end with extreme bravery, but gained nothing for their efforts, yet maintained their dignity and pride to the end of their, often very long, lives.