Battle of the Bridges 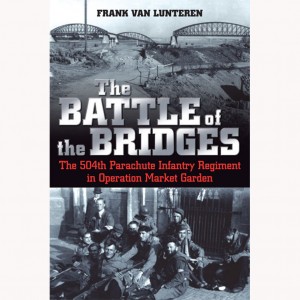 â€¢ A deadly daylight amphibious assault across the Waal River to secure the north end of the Highway Bridge in Nijmegen, Holland, crucial to the success of Operation Market-Garden.
Operation Market Garden has been recorded as a complete Allied failure in World War II, an overreach that resulted in an entire airborne division being destroyed at its apex. However, within that operation were episodes of heroism that still remain unsung.
On September, 17, 1944, the 504th Parachute Infantry Regiment, 82nd Airborne Division, floated down across the Dutch countryside, in the midst of German forces, and proceeded to fight their way to vital bridges to enable the Allied offensive to go forward. The 101st Airborne was behind them; the British 1st Airbourne was far advanced. In the 82nd’s sector the crucial conduits needed to be seized.
The Germans knew the importance of the bridge over the Waal River at Nijmegen as well as James Gavin and his 82nd troopers did. Thus began a desperate fight for the Americans to seize it, no matter what the cost. The Germans would not give, however, and fought tenaciously in the town and fortified the bridge. On September 20 Gavin turned his paratroopers into sailors and conducted a deadly daylight amphibious assault in small plywood and canvas craft across the Waal River to secure the north end of the highway bridge in Nijmegen. German machine guns and mortars boiled the water on the crossing, but somehow a number of paratroopers made it to the far bank. Their ferocity thence rolled up the German defenses, and by the end of day the bridge had fallen.
This book draws on a plethora of previously unpublished sources to shed new light on the exploits of the; Devils in Baggy Pants; by Dutch author and historian Frank van Lunteren. A native of Arnhem;the site of The Bridge too Far; the author draws on nearly 130 interviews he personally conducted with veterans of the 504th, plus Dutch civilians and British and German soldiers, who here tell their story for the first time.