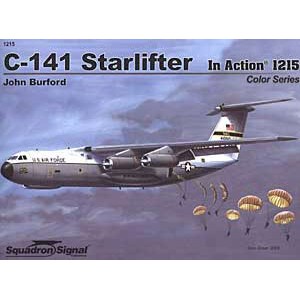 During its long, active life with the military, the C-141 Starlifter has carried troops and equipment in the Vietnam War, Operation Urgent Fury in Granada, Operation Just Cause in Panama, Operations Desert Shield and Desert Storm in Saudi Arabia, Operation Iraqi Freedom, and Operations in Afghanistan. Despite the Starlifter’s long history, the struggle to acquire what would become the C-141 was a long story in itself. Thanks to the fight Lt General William Tunner, the Military Air Transport Service’s commander from 1958 to 1960, waged to obtain an aircraft dedicated to carrying cargo and troops, the Starlifter did come to fruition. The first C-141 rolled out of the Lockheed Plant in Georgia on 22 August 1963 to much fanfare. From there, in war and peace, the C-141’s story has been lifted to the stars of aviation history. Illustrated with over 150 color and 8 b/w photographs, 3-view drawing, 3-scheme color camouflage art, and color profiles; Burford. 58 pages.