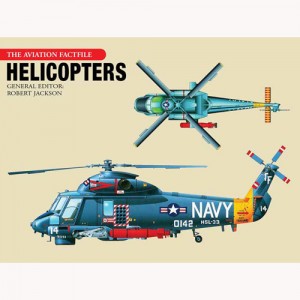 â€¢ A fascinating, colourful, and fact-packed guide which covers each aircraft in detail, with annotated colour profiles
The helicopter has been aptly described as; the toy that grew up;. It really did begin as a toy, for the first really successful helicopter was a model made by two Frenchmen in the eighteenth century. It comprised two sets of blades which rotated under the power of an unwinding string, and it was the first heavier-than-air powered machine known to have made a successful flight. Helicopters is a fascinating, colourful and fact-packed guide. Each aircraft is covered in detail, with annotated colour profile artworks, colour and black & white photographs, feature boxes outlining its development, technical specifications, performance data, and variants. Unique graphics allow the reader to compare specific features such as range, speed and ceiling with contemporary aircraft. Featuring such well-known manufacturers as Bell, Sikorski, Agusta, and Westland and such classic models as the Apache and the Huey, Helicopters is a beautifully presented, landscape format, guide to 120 of the world’s finest rotorcraft.