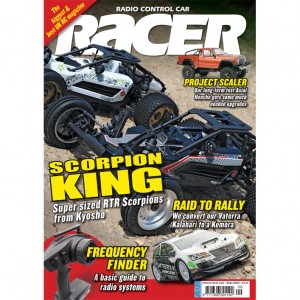 Features
16 Touch It
Carson have released the first touch screen transmitter in the form of the Reflex Ultimate Touch 2.4g model that also comes with telemetry sensors included as standard.
24 XB4 Finale
The Xray 4WD buggy was a huge investment for the company as they entered a new market and the competitive world of 1:10 off-road. With a 2WD in the pipeline, the latest column wraps up the development of the XB4.
32 A Hands On Guide
This monthâ€™s How To from Justin Noble offers a basic guide to radio systems, the designs and what they have to offer…
44 Take Two
Round two of the Nationals was an opportunity for Olly to improve upon his Cotswold result where he felt he got the best from himself and car. Find out how he did at Stafford and whatâ€™s been happening since with this monthâ€™s column.
52 Honcho Gets Updated
Joe Brown fits a whole raft of option parts to Racerâ€™s Axial Honcho review car with parts supplied by Pro-Line, Spektrum, Losi, Junfac, Mtroniks and 3racing. Check out our modified scaler in our four-page feature.
62 Two from Two
Winning round two of the 2013 BRCA National Championship has made Lee Martin the firm favourite for the title in 1:8 off-road. Coventry hosted the second meeting of the year and Racer was there to get all the news.
68 Kalahari Becomes Kemora
We convert our rally raid truck into the rally car option with just a few parts to radically change the Vaterra 1:14 scaleâ€™s look.
82 Flow With the NXR
Jurgen Lautenbach offers Flow setting advice as well as reporting on the development of the new LRP competition 1:8 buggy called the S8 NXR. Tested by the likes of Borja Hernandez and Philipp Guschl, the car has been going well at tough races like the International Warmup Race in Bischofsheim, Germany.
92 Back
Stafford made a happy return to the national calendar for the new-look touring car series and although the track evolved during the weekend, this wasn’t enough to stop Team Durangoâ€™s Elliott Harper racing to his second win of the campaign.
96 Craggâ€™s Championship To Lose
Lee Martin threw his hat into the ring in the battle for the 2WD championship with a win at Eden Park Raceway as Neil Cragg took a hat trick of wins in the 4WD class and place a hand on the trophy.
100 Double Take at Tonbridge
The West Kent Radio Car Club provided a new venue for the 1:12 national competitors and would host the final and deciding round of the 2012-13 series as David Spashett showed his class to wrap up another double title to add to his glowing RC curriculum vitae.
106 Stars of Shizuoka
Whilst the twin stars of Tamiya taking pride of place at the Shizuoka Hobby Show in their home town, there was plenty more to see as Marcus Nicholls travelled to Japan to take in the modelling exhibition.

Reviews
38 LRP S8 Rebel BXe
Updated for 2013, the latest 1:8 electric off-road buggy comes with an improved chassis specification and a top of the range motor and speed control package. After a run through the design, we couldn’t wait to get outside and test the off-roader on a rough and tough section of the local park.
56 Tamiya XV-01 Pro
The XV-01 is what Tamiya refer to as their cross-over design with a 4WD transmission and the motor located ahead of the front wheels. We may have reviewed the standard model before, but this is the top of the range Pro version adorned with a trusty Mitsubishi rally body.
76 Team Associated RC10B4. FT
Is the latest evolution of Team Associatedâ€™s 2WD platform the bets ever chassis on low grip? We think so as we evaluate the changes on the B4.2 and highlight the key features of the car that the manufacturer will pin their hopes on come the World Champs later this year.
84 Kyosho Scorpion XXL
The famous name returns as the new Scorpion hits the shelves in a new 1:7 scale XXL guise. Racer was lucky enough to receive a nitro and electric-powered VE version for evaluation in the magazine ahead of a separate test feature coming soon.