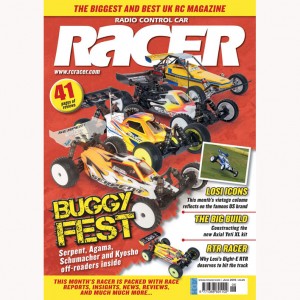 Vintage Team Losi – John Weston reflects on some of the classic Team Losi race cars including the JRX-2 and XX 2WD buggies, as well as the 4WD XX-4 models that are so steeped in RC history.

Catchpole-Walker Takes First Win – Round five of the BRCA national series saw racers head north to Teessideâ€™s permanent facility and with Olly Jefferies absent we were guaranteed new winners in the 10.5T and modified classes.

Building the Beast – The Axial Yeti XL is now available as a kit so the best way to find out the fine details is to go and build one! So we did…

New Releases and TCM Highlights – Jurgen Lautenbach of LRP runs through the major new items announced at the Nuremberg Toy Fair as well as reflects on the companyâ€™s successes at their annual TC Masters race at RÃ¼sselsheim.

Olly Races to Modified ICC Win – The International Carpet Challenge is a two-day meeting that rounds off the Essex Winter Series. The event attracted the top TC racers from the UK as well as some international stars, but it was the Xray duo of Olly Jefferies and Zak Finlay who would take charge in modified and stock.

Agama A215 – Darren Bloomfield won the BRCA National title with a prototype buggy that provided the basis for the A215 model. Now that latest vehicle is available to buy and Nemo Racing kindly sent us a sample for review along with a Bullitt power package and Beta rubber.

Schumacher Cougar KF2 – The Schumacher in recent years has been one of the most popular 2WD buggies being raced out there and last year the KF took the biggest domestic win in the UK. Over the winter, the platform has been improved and upgraded, with the end result being the KF2. In the first of a two-part feature, we construct the model with guidance from the factory race team.

Kyosho Scorpion – The legendary Kyosho Scorpion is credited with taking the racing buggy category into the realm of pure motorsports. After 30 years since it was first released, there is a 2014 version. Externally it may look like the original with its semi-trailing wishbones, but it has been subtly updated as Ian Peckett divulges.

Losi 8ight-E RTR – It may be a Ready-To-Run model, but this high-performance 1:8 E-buggy from Losi is based around its championship-winning brother and with a powerful Dynamite brushless package installed, itâ€™s crying out for a race track to show off.

Serpent Spyder SRX-2 MM – The Serpent line-up continues to develop across many platforms as does their race team that is fast becoming one of the strongest in the industry. After the recent signing of German superstar JÃ¶rn Neumann, we thought we review the 2WD buggy he would drive courtesy of new distributor Serpent UK Off-Road.

Carisma M40S Subaru WRX STi NBR – The Nurburgring is the ultimate test of man and machine and Subaruâ€™s second place finish in gruelling conditions is a testament to how good both the car and driver were. Carisma present their 1:10-scale reproduction of that amazing car here for you to experience.