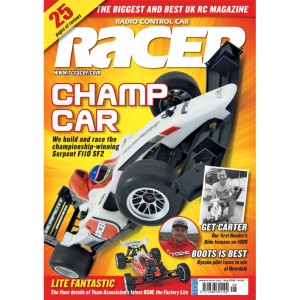 Racer on Tour – Our latest retailer visit sees the team arrive at RC Model Shop Direct and get to see what the Lee Burns and Gary Marsden are offering at their excellent venue located in.

Reader’s Ride – Andy Carter tells us all about a photo that was taken by his local newspaper ahead of his trip to the world championships in Australia back in 1989.

The Highs and Lows – Olly Jefferies reports from the first round of the BRCA National series and the ETS in Luxembourg, as he shares the successes and the challenges he faced at the two meetings.

The Neil and Lee Show – Kidderminster hosted the second round of the national championships in 1:10 off-road and once again Neil Cragg and Lee Martin were in a class of their own as the latter took his second 4WD win of the year whilst Neil enjoyed success in 2WD.

KF2 With Added Speed – Our long-term Schumacher Cougar KF2 is treated to some of the best Speed Secrets upgrades including an alloy upper transmission housing, springs and shock caps, as well as a modification for the front upper link and side guard.

LRP Turn on the Water Works – If you want some fast fun on the water, then look no further than LRP’s Deep Blue boats. In his latest column, Jurgen Lautenbach highlights the features of the 340 and 450 speedboat models as well as reflecting on the Intermodellbau Dortmund fair.

Old But Not Forgotten – This month’s Iconic RC column looks back on favourite tracks from around the country that we have sadly lost forever including the likes of Ashby on-road and the grass off-road track at Chesham to name just a couple.

Wood and Hastings Share First Wins – Drivers from the Serpent and Shepherd teams took the wins at the first and seconds rounds respectively as the BRCA 1:8 On-Road National Championship kicked off at Cotswold and Wombwell.

Tamiya’s Stars of Shizuoka – At their home hobby show, Tamiya showed off a number of new RC models including the compact MF-01X, TT-02B MS, TRF102 and updated TRF211XM as our feature has pictures of all the new items.

Boots The Best on Astro – Deerdale would host the first round of the BRCA 1:8 Off-Road Nationals championship and despite a mediocre qualifying performance, it was Elliott Boots who would come good to take the win with his Reds-powered Kyosho.

Hagberg and Honigl Take Home the Titles – The 2015 EFRA European Championships took place in Slovakia, at what is possibly the best racing venue in the World, the Hudy Racing Arena. The event saw a second stock title for Hupo Honigl and a second consecutive title for Alex Hagberg in the modified class.

Tamiya DT-03T Aqroshot – The latest truck to be based on the Tamiya DT-03 platform is the interestingly named Aqroshot. The latest evolution of the platform was released in the form of the Neo Fighter buggy last year and now the chassis has been adapted to suit the Aqroshot truck.

Serpent F110 SF2 – The Serpent F110 SF2 is the car that team driver Mark Green drove to the championship when the F1 class regained national status. Naturally the car drew admiring looks on and off the track so we were very appreciative when Serpent UK offered us a sample to build and race…