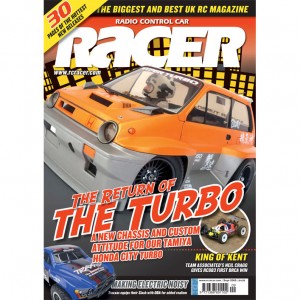 Olly Heads East – Despite a poor second national Olly Jefferies had little time to reflect as he headed off to the final round of the ETS at the Hudy Racing Arena.

RC Icons – In the first of our new series or articles, we take a look at the engineering brilliance that was the Losi Hydra-Drive.

The Bull Takes Shape – The latest instalment of our part build and its clear that we are making great strides as you can see from our main picture. Not only do we have a virtual rolling chassis, but its also time to install the engine’s crankcase.

LRP at the EOS and More – In this column, Jurgen Lautenbach takes a look on his team’s appearance at the European Offroad Series as well as their new range of Gravit Vision quadrocopters.

Xray Take First Blood at Cotswold – The TC nationals kicked off at Olly Jefferies home track of Cotswold and he didn’t disappoint with TQ and the win in modified, and he was joined on the top step by Xray team mate Zak Finlay who mirrored his performance in stock.

Game On – A win for Simon Moss and Schumacher opened up the 2WD championship whilst Yokomo driver Lee Martin zeros in on 4WD with another win.

Restoration RC – In the sixth edition of Restoration RC, Justin Noble finishes the chassis assembly of the TA-01 and mounts the body shell as the buggy continues to get back to its best.

Inside the Serpent – Ahead of a full review, we grabbed the only Serpent SRX-4 in the UK at a recent national event to take a quick look at the interesting design of their 4WD competition buggy.

King of Kent – Neil Cragg gave the prototype RC8B3 buggy its first UK national win as he raced to victory at the second round of the BRCA series at Kent. Simon Reeves reports from the event

Traxxas Slash OBA – You may have seen the Slash 2WD before as our first review was back in 2008 but since then, Traxxas has constantly kept on top of updates for the platform and the latest model offers on-board sound care of an effective OBA system. Tom Stacey finds out what the noise is all about…

FTX Hooligan RX – The Hooligan RX is a an RTR rally car complete with 2.4GHz radio, battery and charger for under £125, and with muscular looks will appeal to a younger audience as well as those looking to get into the RC hobby. So you get a great package, but how did it perform?

Xray X1 – The latest manufacturer to the F1 party is Xray who are putting all of their knowledge and experience into the X1 model. Drawing on the influence of their 1:12 and 1:10 pan car design, the X1 is a stunner with performance to match its high-end looks as we found out when it hit the track.

Vaterra 1986 Chevy Ascender RTR – Hot on the heels of the kit version, Vaterra has released the RTR that is ready to go straight out of the box. Based on the Chevrolet K5 Blazer which is one of the most popular 4×4 vehicles off all time, this 1:10-scale RTR gives you a scale RC version that looks and drives like the real thing without any assembly required.