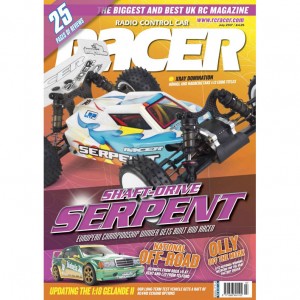 14 Vector X22
Jurgen Lautenbach discusses the new X22 motor and also his company’s recent success at the Neo Race with Davide Ongaro and Akio Sobue at the AOC Shanghai.

28 Pro Tips
This month, Alex Hagberg runs through some of the settings he has on his Sanwa M12S transmitter as well as a great tuning tip with regard to a LiPo.

52 Doing the Double Double
This year’s EFRA 1:12 European Championships were run at Racing Arena Limburg in the Netherlands that saw Alex Hagberg and Hupo Hönigl retain their titles.

56 Yardy Masters Telford
Telford would host round one of the 2017 BRCA National Championships in 1:10 off-road with Team Associated’s Neil Cragg taking the 2WD and Tom Yardy dominating 4WD fro Schumacher.

70 Two Become One
It was a hard decision, but one that proved to be right when on-road star Olly Jefferies curtailed his 1:12 racing to focus solely on touring car.

74 New For Old
Re-releases have become an important part of modern day RC with the likes of Kyosho, Team Associated and Schumacher announcing updated models of old favourites as John Weston finds out.

80 CCHand(y) Upgrades
Kevin Dent goes through the RC4WD options list and selects a range of CCHand parts to give his 1:18-scale Gelande II a proper makeover.

88 Olly’s a One-Day Winner
As the BRCA National Championship for touring cars reverted to a single day competition, it was a former champion Olly Jefferies who got his modified title campaign off to the best start.

60 Serpent Spyder SDX4
The latest Gerd Strenge designed 4WD car has a familiar look and has already won a European Championship title. We got our hands on the latest all-wheel drive Serpent platform and headed to a new track to put it through its paces.