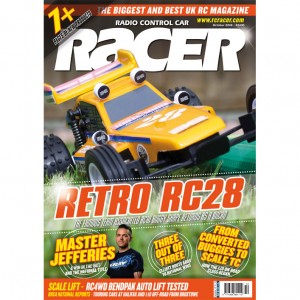 REVIEWS
THE LATEST THRASH TESTS.
42 TEAM ASSOCIATED RC28
The new line-up of RC28 models from Team Associated are
from their Qualifier Series so target the entry-level market
with their low cost and Ready-To-Run format. We couldn’t
wait to put them to review them so were delighted when
CML Distribution sent us both the RC28T (truck) and RC28
(buggy) options to test.

FEATURES
YOUR INSIGHT INTO THE BEST OF RC CARS,
PEOPLE AND TECHNIQUES.
14 TALKING TOURING CAR
In the latest Iconic RC column, Dan Wooster offers his
knowledge of how the touring car scene developed in the
90s and a time when converted 1:10 buggies were ditched
in favour of scale saloons.
24 GRAPHITE EDITION
Tom Stacey’s long-term project has been a retro build
of the famous Team Associated RC10 Graphite. After a
little help from friends and colleagues in the industry, the
restoration has been completed.
32 UNDER PRESSURE
This season’s BRCA 1:10 TC National Championship saw
Olly Jefferies pushed all the way to the title by Elliott
Harper. But when the series went to Halifax and the rain
fell, the Xray driver best mastered the conditions to take
TQ, the round win and overall title.
36 INVINCIBLE ELLIOTT
The dirt track at JC Raceway would host round three of the
2018 BRCA 1:8 Off-Road Nationals and a new track on the
calendar. Despite a fresh venue, Elliott Boots would once
again stand on the top step of the podium making it a clean
swell of national round wins so far.
42 TWO-POST LIFT
One of the king of RC scale accessories is RC4WD with
their mega range of licensed accessories that now includes
BendPak, a company made famous for their garage
equipment like two and four-post lift. Joe Brown got his
hands on RC4WD’s two post option, capable of lifting a
whopping 10kg!