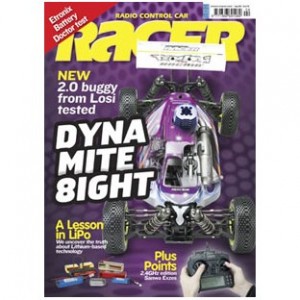 â€¢ Club Racer Finals
Focussing on 1:10 off-road drivers holding an F3, F4 or F5 licence, the BRCA Finals for these drivers give many the chance to shine and their first national-level competition.
â€¢ Smooth Track Winners
Following on from last monthâ€™s 1:10 off-road insight this month sees us under the lexan of National Championship winners Glenn Westwoodâ€™s Schumacher and Chris Graingerâ€™s Yokomo.
â€¢ Learning About LiPo
For the immediate future, Lithium-based cell technology is where manufacturers are concentrating their efforts so we decided to take a three-part look at them so you can use them safely and get the best out of them.
â€¢ Cross Channel Racing
After holding previous races in continental Europe, this yearâ€™s Petit RC Europe Tour race came to the UK and Maritime Racing in Kent. Racer reports from the two-day off-road meeting at a club famed for its on-road events.
â€¢ Williams Wins
He has always been fast but it took Walesâ€™ Russ Williams until Jarrow to win his first 1:12 Modified National at Jarrow in the North-East of England as Elliot Harper took the Stock spoils.
â€¢ Kicking Things Off
After a deserved break over Christmas, Juraj throws himself back into work with product development and the first of the major races in Europe.
â€¢ On the Plus Side
Chris Doughty picks up the new Sanwa Exzes Plus in 2.4GHz spec as he scrutinizes the latest stick transmitter and gives you his opinion of their flagship unit.
â€¢ Calling the Doctor
We test the Etronix Battery Doctor designed to monitor LiPo packs of between two and six cells using the popular JST-type balance connector.
â€¢ Winning at the Worlds
This monthâ€™s column from Jurgen Lautenbach reveals the efforts and lengths LRP went to in preparation for the 1:12 and TC World Championships.
â€¢ Losi 8ight 2.0
Making its debut in Charlotte on the world stage, the 2.0 was the fastest chassis in qualifying and looked superb on the track in the hands of Mike Truhe. With high demand for this Race Roller, it took some time to get our hands on an example but it was well worth the wait with wholesale updates to the 8ight platform.
â€¢ Xray T2â€™009
The new for 2009 Xray touring car proved itself at the World Championships but it has taken some time for the production cars to appear. As usual, there was a queue of eager reviewers keen to investigate the tweaks and design details of the â€˜009 â€“ the results of which you can find out right now.
â€¢ Yokomo CL-Challenger 1.9
This 1:12 scale rock crawler is the first we have seen here at Racer to use a motor at each end that eliminates the need for a central gearbox and driveshafts. It does require a dedicated speed controller but the end result looks promising for this entry-level crawler as we found out.
â€¢ HPI Baja 5T RTR
The 5T is the third chassis to be released in the Baja range and comes in RTR guise with a stadium truck design body that is very popular at the moment. Taking in lessons learnt from the buggy, the truck features new parts that aim to make its performance match its looks.
â€¢ Tamiya TRF801XT
In a surprise move, Tamiya have released a truggy ahead of the buggy with their brand new TRF801XT. Jon Winter passes his eye over the model that will be raced by new signing Ryan Lutz and sees if he thinks it has winning genes.