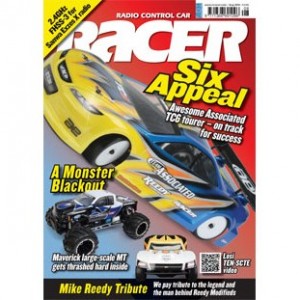 â€¢ LRP Column
This month Jurgen Lautenbach reflects on the 2011 LRP Touring Car Masters held in Eppelheim, Germany where his drivers were once again very successful.
â€¢ Mike Reedy 1941-2011
Racer pays tribute to one of the most respective figures in RC, Mike Reedy of Reedy Modifieds.
â€¢ Eighth On-Road Kicks Off
Rounds one and two were held at Brookland and Wombwell respectively that saw two Serpent 966 chassis wins, but with two different drivers.
â€¢ Sanwa Stick It to the Competitions
We test the latest stick radio from Sanwa in the form of the Exzes X as we find out why the popularity of this 2.4GHz package is rocketing.
â€¢ Frankley Speaking
It may be a new season in 1:8 off-road but at the first round of the 2011 BRCA Nationals began at Frankley, there were two familiar names at the top of the qualifying and come the end of the half hour final.
â€¢ Xray Column
This month Juraj Hudy reports back from two major warm-up races for the Xray team as he helps develop the latest parts for the 808 and T3â€™11 cars.
â€¢ Lee Martin Diary
Three races, three wins for Lee Martin and the TRF511 as get the latest news and info from one of the Worldâ€™s best off-road racers.
â€¢ Boys in the Hood
Paul Bradby and Lee Martin took a win a-piece at the BRCA 1:10 Off-Road National at Robin Hood Raceway with Paul giving the new Centro C4.1 chassis its maiden win, after only getting the car a few days prior to the event.
â€¢ A Classic in the USA
Scottsdale RC Raceway in Arizona provided the backdrop once again for the 25th annual Cactus Classic. A large UK contingent made the trip to the west coast that saw success for Tony Truman and a podium for Lee Martin against some of the best drivers in the World.
â€¢ Associated TC6 FT
With their latest touring car platform, Team Associated appear to have hit the nail on the head with a great chassis that is proving itself on race tracks around the world. This month Racer tests the new TC6 and put it through its paces to see how and where Area 51 has made progress.
â€¢ Losi TEN-SCTE
It wasn’t long ago that short course trucks were all about having fun and the 2WD platform was perfect for this. But with this new 4WD model from Losi, you can now fun and with an alloy chassis and geared diffs, the performance potential has been increased with the ability to fit a 550-sized motor.
â€¢ Maverick Blackout MT
The Maverick brand has invaded the large-scale off-road market with their own version called the Blackout. This monster truck features a powerful 30cc pull-start engine, a 2.4Ghz radio and twin steering servos that all mean you have a great balance of power and control. Despite its large size, we found that the MT was very flexible and we were impressed. To find out all our thoughts on this new platform, head to page 58.
â€¢ Tamiya TT-01E Ford F150
We give this version of the TT-01E chassis a bit of a make over on the outside. Using the SVT F-150 body shell that originally came on the TL-01 chassis between 1999 and 2004, we have tweaked it with a custom paint job and decals to replicate the famous truck from the original Fast and Furious film.
â€¢ HoBao Hyper 10SC
Supplied as a rolling chassis pre-build by the factory, the HoBao Hyper 10SC was one of the first short course trucks to be based around an alloy chassis and use a 4WD transmission. Looking like a scaled down 1:8 off-road model, we equipped our review model with the very best electronics package and then hit the track at a round of the UK Short Course Nationals to see how it stood up against the competition.