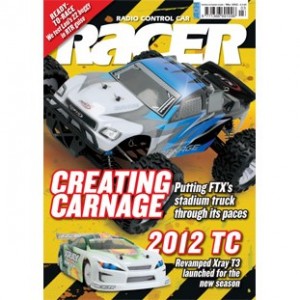 â€¢ King Kyle in 1:8
As the 2011 season wrapped up, a new champion in the form of Kyle Branson was crowned. Andy North reports on the final three rounds of the season.
â€¢ Stiles Sneaks Serpent Win
Running the new S120-LT, Mark Stiles held off the challenge from Olly Jefferies to win the BRCA 1:12 National in stock, but it was the latter who dominated modified at Hereford.
â€¢ LRPâ€™s Successful Licence Application
After planes last month, the March issue sees Jurgen Lautenbach spreading the news of a pair of Mercedes-Benz DTM licenced replicas with two Scots at the wheel.
â€¢ Asian TC Is Go
The ATS Pilot Race kicked off at the Yatabe Arena and it was Germanyâ€™s Ronald VÃ¶lker who gave the Japanese manufacturer Yokomo a home win.
â€¢ New Year, Lots of Changes
Racer contributor Lee Martin brings us up to date with what has happened on and off the track in recent months and the results of a trip to Tamiya in Japan.
â€¢ Production and Prototype
Along with an update of how the Centro C4.1 has performed on track, we also have an insight into Neil Craggâ€™s BRCA National Championship-winning prototype from the 2011 series.
â€¢ The Boat That Joe Built
As Joe Brown enjoyed his time on the water with ProBoatâ€™s WidowMaker 22 so much, he invested in some upgrades for improved durability and to make it more suited to his personal demands.
â€¢ Its Twins!
If you run multiple classes on the same race day, having more than one charger can be a pain, so how about two in one? Team Orion has the answer with the Advantage TwinSpec.
â€¢ Xray T3â€™2012
Updated for the 2012 season, we run through the changes that new designer Martin Hudy has made to Xrayâ€™s top end touring car chassis.
â€¢ Tamiya TA06 Pro
Combining shaft and belt drive, we analyse the pros and cons of the system that Tamiya has integrated into the latest TA range of chassisâ€™, the 06.
â€¢ HPI Bullet MT 3.0
HPI has refreshed the Bullet MT 3.0 and now with an improved spec that boasts a waterproof battery compartment, waterproof servos and rain cover for the air filter.
â€¢ Serpent S120-LT
On the latest 1:12 chassis from Serpent, the design is updated for the use of LiPo batteries with the Link-Tube set-up and a new radio layout.
â€¢ FTX Carnage
Priced at a under Â£110, the Carnage package from FTX offers great value for money especially when you consider this is a true RTR with 4WD as well as a battery and slow charger all included as standard.
â€¢ Losi 22 RTR
The 22 from Losi is the RTR version of the TLR version and unsurprisingly is more ready-to-race than ready-to-run! With its ready-built format and racetrack focus, we hit a local club race for some fun.
â€¢ LRP S10 Blast SC
The latest model to be based on the proven S10 Blast platform is the SC. With 4WD, oil-filled shocks and many other key features, this RTR is more than just a low-spec entry-level machine