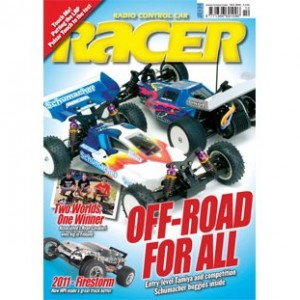 â€¢ Hands On Charging
With some great unique features, the LRP Pulsar Touch Competition charger stands out from crowd
â€¢ LRP Column
Itâ€™s all about LRP entry-level products this month as motors, speed controllers and a short course truck all feature.
â€¢ Two Days of Slough
The Remote World Model Car Club hosted the annual two day National and whilst Darren Bloomfield dominated qualifying, Elliott Boots too the win.
â€¢ Championship Wins
Neil Cragg and Lee Martin shared the wins as the National series returned to Kidderminster and with it, showed championship-winning form.
â€¢ Weighting Room
We test Deluxe Materialâ€™s Liquid Gravity product that has a whole host of applications for the RC enthusiast and racer.
â€¢ Lee Martin Diary
Another busy month of travelling for TRFâ€™s leading off-road racer, Lee Martin as he reports in on life as a professional RC race car driver.
â€¢ Hot Topic
Competition Heat has revamped their engine heater so we decided to put the new Deuce model to the test.
â€¢ Twin Cup
Ellis Stafford took two wins at the first TLR Super Cup hosted by Eden Park Raceway. With a different race schedule and a change of emphasis, the meeting was a huge success for all.
â€¢ The Man Behind V-Dezign
Racer interviews top racer and V-Dezign designer Vesa Yli as we find out more about the company and their 1:12 on-road products.
â€¢ Wet Weekend
The weather was the only winner as the inclement conditions succeeded over the competitors at the BRCA 1:10 Touring Car National hosted by the Cotswold club
â€¢ HPI E-Firestorm 10T
For 2011, HPI has given the E-Firestorm 10T a make over and is no raced with a 2.4GHz radio set-up, waterproof electronics and weatherproof box for the receiver. We find out what other changes they have made and how they will benefit the owner.
â€¢ Carisma GT14B RTR
This GT14B has proven itself on the racing scene despite being sold as an RTR model. With a few upgrades, the GT14B has won at National level so we were very keen to put this buggy to the test. Of course we kept things standard as we evaluated the package, and found it to be very good indeedâ€¦
â€¢ Xray NT1 2011 Specs
The 2011 Specs model NT1 is the next evolution of Xrayâ€™s World Championship-winning platform. Using the very highest quality materials, Xray claim that their chassis is world’s lowest CG nitro touring car platform. Racer builds the latest model and then hits the track for an in-depth analysis.
â€¢ Tamiya DN-01 Zahhak
Marketed as an entry-level 2WD buggy, Tamiyaâ€™s Zahhak uses the design of the proven TRF201 model but in a lesser specification aimed at keeping the price down. With the right genetics though and the ability to upgrade, the Zahhak could prove to be an ideal choice for the long-term.
â€¢ Schumacher CAT SX3
After the success of the first two SX models, the SX3 features a thorough overhaul in the transmission and styling department. Visually, the SX3 has a new look with a brand new body and under tray that protects the three-belt transmission inside.