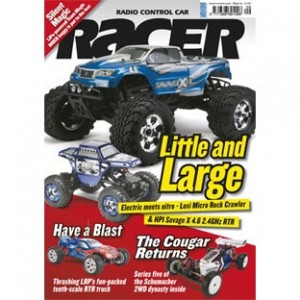 â€¢ Darren Blooms at Two-Day Nats
The annual two-day BRCA 1:8 Off-Road National took place on the dirt at the Herts track in Ware and saw a dominant performance for championship hopeful, Darren Bloomfield.
â€¢ Lee Makes it Three
After wins at Talywain and Robin Hood Raceway, former 4WD Champion Lee Martin made it three from three with his Tamiya car as he raced from second on the grid to take the win at Eden Park Raceway.
â€¢ Chrisâ€™ Championships
After his European Championship win at Hinckley, Chris Kerswell has been on a bit of a role as he nicked the Stock and Open Modified wins in the BRCA series at the final hurdle.
â€¢ LRP Column
With the S8 BXe and TXe RTRs, LRP has brought together their world championship-winning electric brushless technology with a national winning chassis design into the growing 1:8 off-road electric racing scene.
â€¢ Smith Stars in Pro Stock
Chris Grainger may have continued where he left off in 2009 with another Modified win and TQ, but it Zak Smith who took his first National round win in Pro Stock as the 2010 series kicked off at Mendip.
â€¢ Xray Column
Juraj Hudy reports in from another busy month and brings our readers up to date with whatâ€™s happening at Team Xray.
â€¢ Green With Envy
Andy North reports in from the first two rounds of the BRCA 1:8 On-Road Nationals as Serpentâ€™s Mark Green was in stunning form, winning both at Mendip and Wombwell.
â€¢ Losi Micro Rock Crawler
Our new signing to the Racer review team gets his hands on Losiâ€™s neat Micro Rock Crawler package in RTR format. Despite him being a racer at heart, itâ€™s clear that the ease of use and fun element has had a huge impact.
â€¢ Schumacher Cougar SV
It has been a long time coming, but finally the Schumacher Cougar is back and we have built one up to see if the legend has really returnedâ€¦
â€¢ Team Magic M8ER
With Team Magic, you always get something a little different and their new electric-powered M8ER is no different. From the incredibly low-slung body shell to the interesting ideas when it comes to the chassis and suspension.
â€¢ HPI Savage X 4.6 2.4GHz
Constantly improved since it was first introduced in 2002, the HPI Savage is arguably the most well-known RC monster truck of them all. Now the latest evolution comes supplied with 2.4GHz DSSS radio gear for added simplicity
â€¢ LRP S10 Blast TX RTR
The second in the LRP Blast 1:10th off-road series comes in a truck format, but unlike most 2WD stadium machines, the S10 TX has a four-wheel-drive trick up its sleeve.
â€¢ Tamiya CC-01 Unimog
We give Tamiya’s latest CC-01 chassis release to full-size German car specialist Paul Constable to give it the once over…