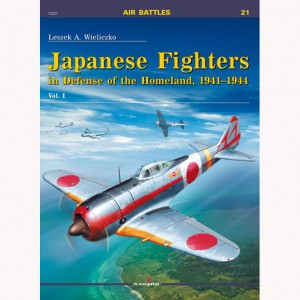 When the Empire of Japan started the war against Western powers in 1941, it had only a small number of air force units deployed on the Japanese home islands in order to defend them. The Doolittle Raid on 18 April 1942 came as such a shock for the Japanese High Command that it caused structural changes within the Japanese air defence system and speeded up the introduction of new types of fighters. Much bigger threat for Japan emerged in the mid of June 1944 when the first air raid of B-29 bombers reached the Japanese home islands. Since that moment protecting Japanese cities from the devastating blows carried out by the U.S. bombers became the General Defence Command (Boei Soshirebu) main task.
Volume I describes the forming process of the Japanese air defence system since the creation of the General Defence Command in July 1941, throughout the structural changes within the following years, preparations to counter the U.S. bomb raids until the air battles fought between June and December 1944 in the defence of Japan. This part of the book also includes descriptions of all major types of Japanese fighters which were deployed in air defence units.