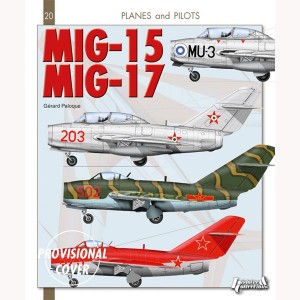 At the beginning of the Korean War, the West discovered the MiG-15, the first mass-produced fighter constructed in the Soviet Union. This small apparatus entered into service at the end of 1950 in an improved version the MiG15bis, which was in its turn quickly deployed in Korea where, with its powerful armament and its good manoeuvrability, it was a bad shock to the forces of the United Nations, which did not retrieve their air superiority which they had gained with the arrival of the last versions of the celebrated F-86 Sabre. Even though the MiG-15 had hardly entered into service, MiG conceived its successor, better performing and with modified wings, the MiG-17.
If the type was retired from service in the USSR at the end of the sixties, it had a second life and great success in foreign lands, the Fresco being the most-exported Soviet fighter until the arrival of its indirect successor, the MiG-21 (cf. Avions Pilotes no 12).