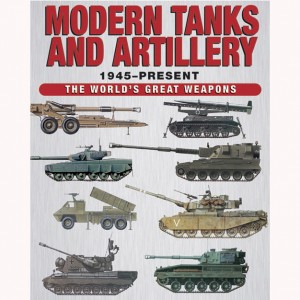 Illustrated with hundreds of detailed artworks of AFVs and their markings, Modern Tanks and Artillery is a comprehensive study of the armoured fighting vehicles and guns of every nationality from the beginning of the Cold War to the present.
The book is split into two volumes, the first detailing tanks and AFVs, and the second covering artillery guns, rockets and self-propelled guns. Each volume is further subdivided by theatre and conflict.
The first volume provides a comprehensive study of the AFVs in service from the end of World War II until the recent conflicts in Iraq and Afghanistan. Well-known tanks deployed in various wars are included, such as the Soviet IS-3, T-54 and T-72 tanks, as well as the German Leopard, British Chieftain, and American M1A1 Abrams. The second volume provides a detailed analysis of artillery since the end of World War II, including ubiquitous workhorses such as the 2S3 (M1973) 152mm Howitzer, the FH-70 howitzer and the G5 howitzer. Rockets of various types, such as the Rapier surface-to-air missile, Pershing II ballistic missile and BM-30 Smerch multiple heavy rocket launcher are also included.
Packed with more than 400 colour artworks and photographs with exhaustive specifications, Modern Tanks and Artillery is a key reference for modellers and enthusiasts of modern guns and armoured fighting vehicles.