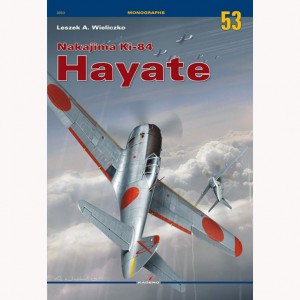 The monograph on the Nakajima Ki-84 Hayate, WW2 Japanese fighter plane, discusses its origins and development (including subsequent modifications and variants: Ki-106, Ki-113, Ki-116, Ki-84R, Ki-84P and Ki-84N), camouflage and markings and operational history since its combat debut over China in Summer of 1944 till the end of the WW2. Each version is specified and described. The author uncovers the fates of Ki-84s captured by the Americans and presents an evaluation of the aircraft. The book includes a comprehensive technical description, technical data, a glossary of some Japanese terms and names and lists of the IJAAF units equipped with Ki-84s and the IJAAF ranks.