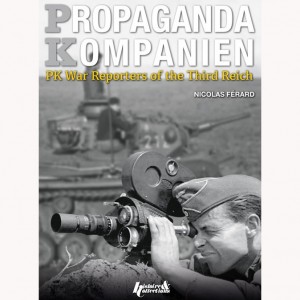 â€¢ An excellent guide to the Propagandakompanien, the primary method of public communication of the Third Reich. The Propagandakompanien, the German propaganda companies, were the primary method of communication of the Third Reich. The soldiers of the Wehrmacht and Waffen-SS were the eyes and ears of the Ministry of Propaganda who relied upon them to transform the reality of victories into defeats. While their photographs and their films are known, nothing has been written about the people behind the cameras, all the technicians associated with the propaganda machine. This first volume presents the implementation of this psychological weapon, from an organisational point of view, technical and human. With extensive documentation, the Wehrmacht propaganda companies are presented with a particular focus on 6 Pk. of the Luftwaffe. Finally, thanks to the testimony of reporters the author details the campaigns in Poland, Norway, France and the beginning of the Russian campaign. THIS BOOK IS IN ENGLISH.