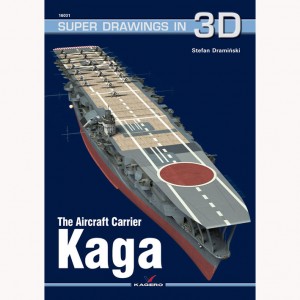 She was initially being built as a battleship, but as a result of a coincidence she became one of the first large carriers in history. She was a part of Japanese KidÅ Butai, a group of carriers that decided about the power of the Imperial Japanese Navy during the first half-year of the war in Pacific.

After a daring attack on Pearl Harbor followed by a series of further victories there was a reversal during the battle of Midway, when Kaga and three accompanying carriers were destroyed which ultimately buried Japanâ€™s chances for winning the war.

On 2 June 1919 the Japanese Committee for Defence of Japan along with the Council of Ministers accepted the plan of construction of four battleships, four battlecruisers and smaller vessels during 1921 â€“ 1928. The acceptation of the project was a bit postponed. In June 1920 the Parliament passed the program of completion of the â€œ8-8 fleetâ€. Among the planned 103 vessels of various classes the most important were eight battleships and eight battlecruisers. Two carriers were also planned. The first of them was to be ordered on 2 March 1921 and named ShÅkaku and the other one â€“ not named yet â€“ was to be ordered a year later.