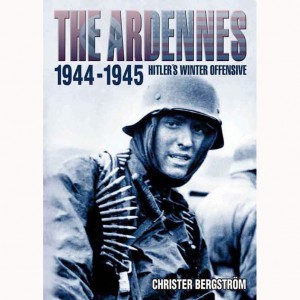 The Centenary of the Western Front in Pictures

Hitler’s Winter Offensive
â€¢ This will totally change the perception of the Battle of the Bulgeâ€”a main reference work for many years to come.
‘If one should only talk about ONE book about World War II this year, it would be The Ardennes 1944-1945 by Christer BergstrÃ¶m.’ A true milestone… Lars Gyllenhaal, military historian and member of the Swedish Military History Committee.
This will become a work of reference… Christer Bergstroumlm’s best book ever. Highly recommendable;… Martin Maringnsson, military historian and writer.
I have never read such a good book on the Second World War… Lars Navander, Lieutenant Colonel and former Intelligence Officer at the Headquarters.
Christer Bergstroumlm’s book is a brilliant, well-written and throurough-going account of one of the decisive battles of the Second World War. From Swedish Library Service’s review of Ardennerna 1944-1945: Hitlers vinteroffensiv. Reviewer: Tord Roumlnnholm.
In December 1944, just at the end of World War II , Hitler shocked the whole world with a powerful German counter-offensive in the Ardennes. The ensuing battle, known as the Battle of the Bulge,
In this book, highly renowned Swedish World War II expert Christer Bergstroumlm presents a dramatically new picture of this epic winter battle. Allied efforts to hide the true extent of U.S. losses, myths created by German generals after the war, numerous forgotten tank battles during the Battle of the Bulge, and the exceptionally well-prepared German offensive;all is uncovered in this truly groundbreaking book. Bergstroumlm has undertaken a scrupulous research work, interviewed veterans and traveled and studied the area for many years. The result is a book that will totally change the perception of the Battle of the Bulge.
This will be a main reference work for many years to come.
The book is provided with 400 illustrations, including many never previously published photographs, numerous detailed maps, and tank and aircraft colour profiles by Claes Sundin.
The Swedish edition of this book was published in 2013 and sold over 3,000 copies in six months.