The Encyclopedia of Weapons of World War II 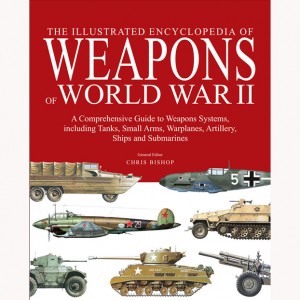 The Comprehensive Guide to over 1500 Weapons Systems, including Tanks, Small Arms, Warplanes, Artillery, Ships and Submarines

What was the armament and crew of the German Tiger tank and its Soviet equivalent, the T-34? What was the calibre and effective range of the Lee-Enfield bolt-action rifle? World War II spawned a massive variety of weapons systems, many complex, all fascinating and exciting.
The Encyclopedia of Weapons of World War II is an easy-to-read illustrated compendium of the military hardware; from air, sea or land; which was used in engagements around the globe from 1939 to 1945. It includes more than 1500 pieces of equipment from handguns to aircraft carriers. Each weapon system is illustrated with a detailed profile artwork and a photograph showing the weapons system in service. Accompanying the illustrative material is detailed text that lists each weapon’s service history, the numbers built, and its variants, as well as full specifications.
When did the Hawker Hurricane make its maiden flight? What role did Japanese light cruisers play? The Encyclopedia of Weapons of World War II answers these questions and many more. A fund of World War II weapons information, this is a must for military historians and anyone with a keen interest in the history of World War II.