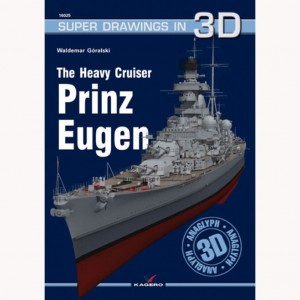 An enlarged Admiral Hipper-class heavy cruiser which served with the Kriegsmarine of Germany during World War II, Prinz Eugen was launched on 22 August 1938 and commissioned on 1 August 1940. She survived to the end of the war, only to sink following Operation Crossroads, a nuclear weapon test at Bikini Atoll in 1946.

During her war career, Prinz Eugen fought alongside the battleship Bismarck in the Battle of the Denmark Strait, where she was hit three times; was torpedoed by the British submarine HMS Trident, and from August 1944 onward, she was deployed to shell advancing Soviet troop concentrations along the Baltic coast and to transport German refugees to the west.

About Super Drawings in 3D This series focuses on the construction of famous ships â€“ battleships, carriers, cruisers, and submarines. With ground-breaking 3D imagery, each corner, angle, and dimension of the ship is viewable. With various close-up views, and each 3D image based on actual technical scale drawings and photographs, this makes an exceptional reference tool. Information on the design, development and combat history of each vessel is also included, as well as numerous photographs and 1/350th scale drawings.

Following the defeat in the World War I, the Treaty of Versailles limited the tonnage of the German Navy to 144 thousand tons. Moreover, the treaty stipulated that new warships could only be built to replace the decommissioned ones. In 1921 a new law was enacted which brought about the creation of the Reichsmarine. The few warships that Germany was allowed to keep were modernised and new ones were being built to replace the obsolete ones. Construction of light cruisers was a priority and the first of those, built to replace the Niobe launched in the 19th century, was the Emden. In 1927, during the disarmament conference in Geneva, Germany demanded equal right as far as the expansion of the navy was concerned. Those demands were rejected, therefore, the Reichsmarine drew up the â€œexpansion planâ€. It stipulated construction of new warships within the coming years, including submarines, which were forbidden by the Treaty of Versaillesâ€¦