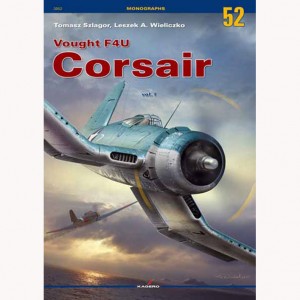 The Vought F4U Corsair was one of the best and most famous fighters of World War Two era. Developed since 1938, it didnâ€™t see serial production until mid-1942. Initially disqualified for carrier operations, it was handed over to land-based US Marine Corps fighter units.
The first volume deals with the design and development phase from the XF4U-1 prototype through F4U-1, F4U-1A and F4U-1D models to F4U-2 night fighter version and the high-altitude XF4U-3 prototype. A separate chapter has been devoted to camouflage and markings of the Corsairs serving with the US Navy and US Marine Corps between 1942 and 1945. Another chapter, based on hundreds of pages from original war diaries of Marine squadrons operating Corsairs, details their operational service during the Solomons campaign and the aerial offensive against the Japanese fortress of Rabaul, covering the period between February 1943 and early 1944. It was in the South Pacific that Corsairs proved their worth and earned a well deserved fame.
Highly illustrated with 9 painting schemes and 19 artworks