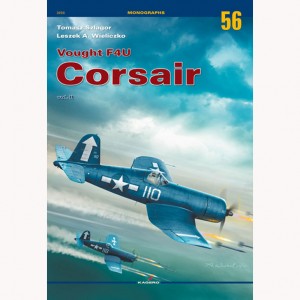 The second volume carries on the story of the F4U Corsair by examining its development and operational service in later stages of the World War Two.
By early 1944 the Corsair well proved its worth in combat. Finally qualified for carrier operations, it began to challenge the Hellcatâ€™s status of the US Navyâ€™s primary fighter aircraft. The F4U-1D, capable of carrying nearly a ton of bombs and eight rocket missiles, excelled both in aerial combat and ground attacks. Itâ€™s fighter-bomber capabilities were put to good use during the little-known campaigns in the Marshalls, Marianas and Palau Islands, as well as in the Philippines, which are related here in unparalleled detail. Much attention is dedicated to the initial deployment of the Corsair (both night and day fighters) aboard US Navy carriers, spanning the period between February 1944 and March 1945, which culminated in the first raids against Japan.
Meanwhile, Vought and Goodyear engineers continued to improve and refine the Corsair. New, more powerful engines enabled them to develop two more versions before the warâ€™s end â€“ the ultimate Corsair (Vought F4U-4) and the Super Corsair (Goodyear F2G-1/2). Their story is related in the opening chapter. A separate chapter is devoted to camouflage and markings of British and New Zealandâ€™s Corsairs, with a brief resume of the aircraftâ€™s service in the two air forces. The book is further supplemented by numerous data in tabular form, colour profiles of five representative aircraft and 1/48 scale drawings of various versions.