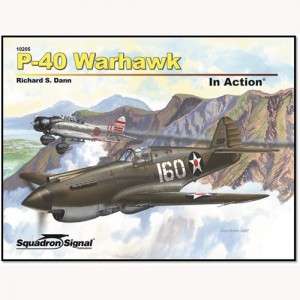 The Curtiss P-40 Warhawk, a U.S. single-engine, single-seat, all-metal fighter and ground-attack aircraft, first took to the air in 1939. In service throughout World War II and used by most Allied powers during the war, the P-40 was the third most-produced American pursuit plane. A total of 13,738 of the aircraft were produced by the time output ceased in November of 1944. The P-40 first saw combat with British Commonwealth forces in June 1941, even before the U.S. had entered the conflict. It was in the Pacific, however, that the aircraft became an icon. Decorated with menacing shark mouths, P-40s served as workhorse fighters of the American Volunteer Group – better known as the “Flying Tigers,” who came to China in late 1941, following the withdrawal of the Soviet Volunteer Group earlier that year, as the USSR faced with the full onslaught of Nazi Germany, struggled to maintain a precarious neutrality with Japan and avoid a two-front war. Meanwhile, the P-40 was the first Allied fighter to be supplied to the Soviet Union under Lend-Lease for use against the Germans. After Pearl Harbour, the U.S. Army Air Force flew the P-40 extensively in the Mediterranean Theater and during Operation Torch and the subsequent advance northwards into Europe. Illustrated with 168 photographs, numerous colour profiles, and detailed line drawings, this volume traces the development of the various modifications of the P-40 throughout the war years and carries on with a few contemporary shots of surviving P-40s still going through their paces at airshows today. 80 pages.
ISBN 978-0-89747-804-5.