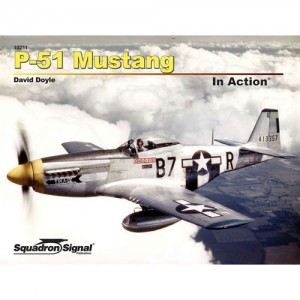 Its contrails twisting through the clouds, one fighter aircraft was able to escort America’s heavy bombers from England to Berlin, and from Iwo Jima to Tokyo, the North American P-51 Mustang. Beyond bomber escort, this iconic Pursuit (later F- for fighter) aircraft was employed against ground targets using machine guns, rockets, and bombs, in fact one variant was specifically produced as a dive bomber, an Allied counterpart to Germany’s famed Stuka. Including derivatives, the Mustang soldiered on in the arsenal of America and her allies into the 1980s, and was responsible for downing over 5,000 enemy aircraft.

Illustrated with over 170 photos, one-third of which are in rare vintage colour, detailed line drawings, colour profiles augment the archival images to present this new look at the Mustang, from the early experimental NA-73X to the PA-48, the final military variant. 80 pages.