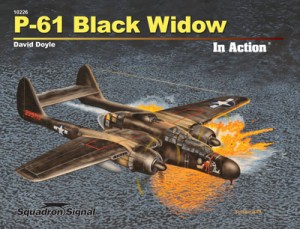 Designed by Jack Northrop and Vladimir Pavlecka in response to a secret Army Air Corps request, the P-61, dubbed the Black Widow, became not only America’s first purpose-built night fighter, but also the largest and most heavily-armed operational fighter flown by the United States during World War II. Â Despite being the size of a medium bomber, the unique control surfaces of the P-61 made it surprisingly agile, and among its many successes is downing of the final enemy aircraft of the war. This 80-page book tells the story of the Black Widow from the experimental XP-61 on through the final production variant, the F-15A, through 164 black and white and 30 vintage color photos, augmented by four colour profiles and a dozen detailed line drawings.