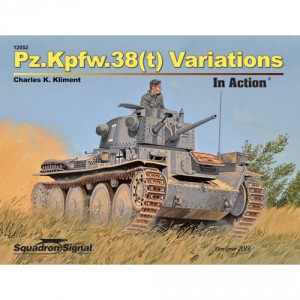 The tank that has gone down in history as the Pz.Kpfw.38(t) was originally christened the LT vz. 38 or ‘Light Tank model 38’ by its Czechoslovak manufacturers before World War II. Intended for the Czechoslovak armed forces, its early models were also supplied to Sweden, Iran, Peru, and Switzerland, and saw action during the 1941 conflict between Peru and Ecuador. But like the Czech lands themselves, the tank and its industrial producers were seized by Nazi Germany when Hitler’s forces took over the Central European country on the eve of World War II. Pressed into German service, the Pz.Kpfw.38(t), as the vehicle was renamed, became one of the most widely used Czechoslovak fighting vehicles. The Pz.Kpfw.38(t) saw extensive action during Germanyâ€™s invasions of Poland in 1939 and France in 1940. The tank accounted for a significant part of the armored units that poured across the Soviet frontier on 22 June 1941. The excellent chassis was later used as a basis for tank hunters, self-propelled artillery, and antiaircraft vehicles, and in the last year of the war for a Jagdpanzer 38 ‘Hetzer.’ Illustrated with more than 186 photographs, detailed line drawings and colour profiles; 80 pages.