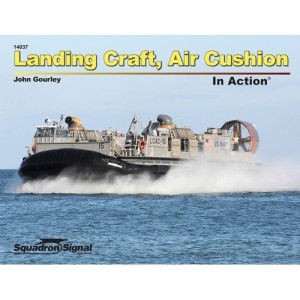 In 1966 a Landing Craft Coordinating Group was assembled to discuss and draft specifications for a new landing craft. The work resulted in the Patrol Air Cushion Vehicle (PACV) that saw service in the Vietnam War. By 1970 designs for an Amphibious Assault Landing Craft (AALC) were on the drawing board. The U.S. Navy ordered the first three LCACs February 1982. LCACs move over rocks and other beach obstacles and have reduced susceptibility to damage from mines. The crew consists of five enlisted personnel: a Deck Engineer, a Load Master, a Navigator, an Engineer, and a Craft Master. LCACs are not given names, only pennant numbers to differentiate between them. With an originally specified 30-year life expectancy, LCACs would have begun to retire in 2004 but for a major Service Live Extension Program (SLEP) begun in 2001. Packed with more than 240 vivid colour photos, comprehensive tables, colour profiles and detailed line drawings. 80 pages.