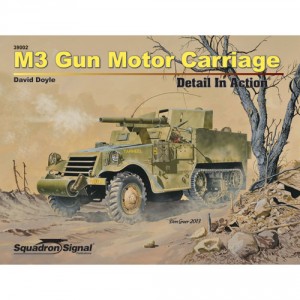 In the early days of World War II, the US Army developed many specialised vehicles based on the standard US halftrack chassis. One such vehicle, the M3 Gun Motor Carriage, was engineered to be a self-propelled antitank gun, melding the venerable 75mm 1897A4 cannon – the famed ‘French 75’ -Â  with the then-modern halftrack chassis built by Autocar. The ever-increasing armour protection of German tanks combined with advances in fully-tracked tank destroyers led the Army to eschew the vehicle after limited use in Europe, notably in Sicily.Â  The US Marines, however, used the vehicle in several campaigns in the Pacific, where the Marines brought the canon to bear on comparatively thin Japanese armour as well as bunkers. Chronicles the development and combat use of the M3 Gun Motor Carriage through vintage photos, as well as thoroughly documenting the only fully restored example in existence through additional full-colour images. Illustrated with 237 photographs; 80 pages.