A-10 Warthog in Action 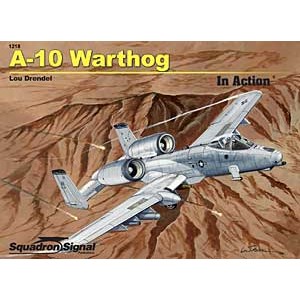 The A-10 Warthog, a twin engine US Air Force ground attack jet, was designed and built from the wheels up for the sole purpose of supporting ground forces. Outwardly ugly and ungainly, the A-10 is one of the most efficient aerial killers ever to take to the sky. Sheathed in 900 pounds of titanium armor, the Warthog – whose official name is the Thunderbolt II – can survive direct hits from armor-piercing and high-explosive projectiles as large as 23mm. It has triple redundancy in its flight control systems, allowing pilots to fly and land when hydraulic power is out or part of a wing has been shot off. Introduced in the mid-1970s, the A-10 has seen service in the Gulf War of 1990-1991; in the Balkans, later in the 1990s; in Afghanistan after 2001; and in the occupation of Iraq, beginning in the spring of 2003. Illustrated with more than 106 photographs, 11 full color paintings, 43 detail drawings and 2 pages of 3-view drawings. 56 pages.