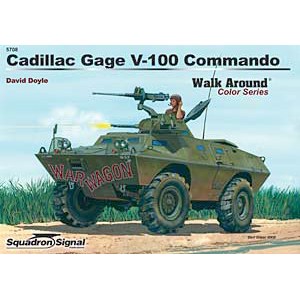 Cadillac Gage V-100 Commando Colour Walk Around. The best-known American armoured car of the post-WWII era, the Cadillac Gage Commando – a versatile, amphibious, 4×4 vehicle – still looks modern even though it made its debut in 1962. The V-100 Commando went through numerous changes in light of its extensive and varied experience in reconnaissance, convoy escort, riot control, security, and as a personnel carrier. As it proved its worth to America’s South Vietnamese allies and later to US forces in Southeast Asia, Cadillac Gage introduced one modification after another in response to evolving combat needs. Although US military use of the Commando declined after the end of the Vietnam War, many Commandos were rebuilt and to this day, serve police forces and SWAT teams in Europe and the US, while various armies around the world still use descendents of the combat version. Illustrated with over 200 colour photographs plus detailed line drawings; Doyle.80 pages.