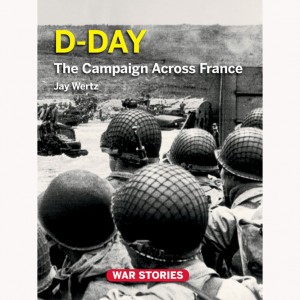 The Campaign Across France

A complete picture of the campaign across France in the words of those who lived it, from both sides.

The second volume in the War Stories: World War II Firsthand series tackles the largest amphibious invasion ever attempted until that time — the historic landing at Normandy on June 6, 1944. More than eighty veterans on both sides of the Atlantic Wall give their perspectives on the event, and the bloody two-month struggle which resulted in the Anglo-American allies wrestling France from the German defenders. Preparations for Operation Overlord, including air and sea operations to support the gargantuan landing are covered in vibrant, authentic detail. Rich with colour images, famous photographs and original 3-D maps, the 9″ x 12″ volume also presents the timeline of events, places and personalities, giving a complete picture of the campaign across France. The volume won a Silver Medal in the 2012 Independent Publisher Book Awards (IPPY) in the World History category and Best Book 2012 in the History: Military/Political category from USA Book News.