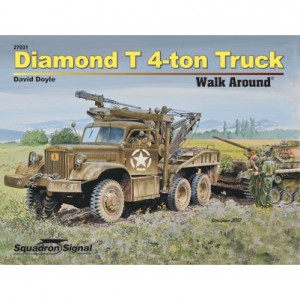 As it became increasingly apparent that the United States could not avoid getting involved in World War II, the U.S. Army stepped up its efforts at modernization and industrial mobilization. Toward this end, the Quartermaster Corps ordered a series of 4-ton 6×6 trucks from Chicago-based Diamond T Motor Car Company. The chassis of the artillery prime mover was adapted for use a dump truck, a long-wheelbase truck to transport bridging equipment, and what would become the U.S. Armyâ€™s standard medium wrecker during WWII. The design of the Diamond T was so successful that it is widely recognized as the forerunner of the Armyâ€™s post-WWII M-series trucks, which were utilized for 50 years. For this book, the finest preserved examples of the classic Diamond T were sought out and extensively photographed, resulting in a volume packed with 227 color photographs augmented by five period black-and-white photos.