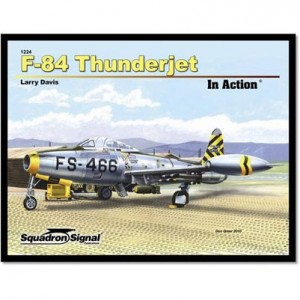 Entering service in 1947, Republic Aviation’s F-84 was the primary strike aircraft of the US Air Force during the Korean War. Thunderjets flew 86,408 missions during the conflict and took out 60 percent of the ground targets eliminated by American forces. In addition, 8 Soviet-built MiG fighters met their end thanks to F-84 pilots. Besides service in Asia, the Strategic Air Command Maintained Thunderjets from 1950 through 1957 and they also were the first aircraft adopted by the Thunderbirds demonstration team. The F-84 saw extensive service in the colors of other nations; more than half of the 7,524 F-84s were exported to NATO and many served other US allies. Thunderjets were the 1st production fighter to utilize in-flight refueling and, fitted with the Mk 7 nuclear bomb, they became the 1st nuclear-capable fighter jets. F-84F Thunderstreaks and RF-84F Thunder flash reconnaissance aircraft served well into the 1970s with both USAF Guard and NATO squadrons. After the Korean War, the F-84 took part in the Suez Crisis and the Berlin Crisis and stood alert during the first 2 decades of the Cold War. Illustrated with 165 photographs plus color profiles and detailed line drawings; 72 pages.