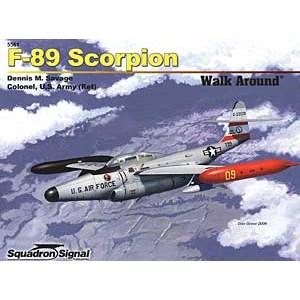 As the United States entered the Jet Age, the military sought a jet-propelled replacement for the P-61 Black Widow and F-82 Twin Mustang night fighters. After beating out tough competition from other US aircraft makers, Northop’s F-89 stepped into the role as all-weather interceptor. Nicknamed the Scorpion because of its high, up-swept tail, the F-89 entered service in 1951 and served through 1969. Equipped with advanced radar for its time, the Scorpion guarded the Cold War skies over the northern frontiers of the United States, ready to confront Soviet circumpolar nuclear bomber attack, while earning the distinction of being the 1st combat aircraft armed with nuclear air-to-air weapons (Genie rockets). Illustrated with 200 photographs, plus color profiles and detailed line drawings; Savage; 60 pages.