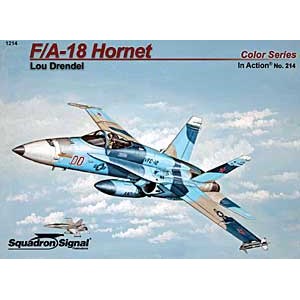 The F/A-18 Hornet has become the most common aircraft on the decks of US aircraft carriers in the history of naval aviation. While the Super Hornet is a distant relation of the A-D Hornets, they all trace their roots to the loser of the lightweight fighter competition of the early 1970s, the Northrop YF-17. However, the Navy had a requirement for a lightweight fighter to replace the A-7 and F-4 and the US Congress dictated that the Navy choose one of the lightweight fighter contenders as its new fighter/attack aircraft. The twin-engine YF-17 had a definite advantage in this competition; on 2 May 1975, the Navy announced the MDD/Northrop design as the winner. The new lightweight fighter would be built as the F-18. More than 100 photographs, colour profiles and detailed line drawings. Drendel. 52 pages.