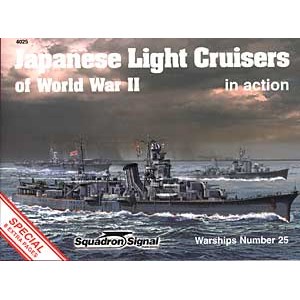 Reissue – Japanese Light Cruisers in Action. At the beginning of World War II, the Imperial Japanese Navy operated a light cruiser force of 20 ships and added another five during the course of the war. These fast ships, carrying seaplanes and heavy torpedo armament, generally were used as flagships for destroyer flotillas and submarine squadrons. Of these, 9 were sunk by Allied submarines, 11 were sunk by US aircraft, 2 were sunk by US torpedo boats or destroyers, and 3 were still afloat at the end of the war. Includes never before published photos, 90 b/w photos, 6 colour profiles, line drawings, colour covers; 58 pages.