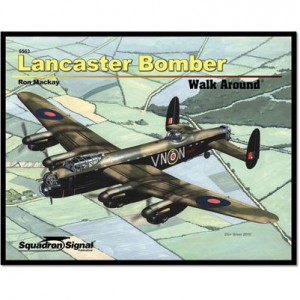 The Avro Lancaster was unquestionably the finest all-around performer within RAF Bomber Command during the air war against Nazi Germany between 1942 and 1945. The Lancaster flew no fewer than 156,000 individual sorties and dropped more than 600,000 tons of explosives and incendiaries, playing a leading role in bringing Hitler’s Reich to its knees. Known for its greenhouse cockpit, turret nose, twin tail, and 33-foot long bomb bay the Lancaster took part in Air Marshall Harris’s ‘Operation Gomorrah’ in July 1943, in which Germany’s industrial center of Hamburg was devastated by round-the-clock bombing raids. In the thick of the air war, the Lancasterâ€™s also paid a high price – 3,249 were lost in action. This volume is enhanced by the fact that the author’s uncle survived 36 operations as a bomb-aimer aboard a Lancaster of No 49 Squadron. Illustrated with 200 photographs, plus color profiles and detailed line drawings; 80 pages.