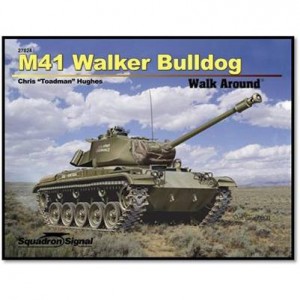 The standard U.S. light tank during the early years of the Cold War, the M41 Bulldog was developed as a more powerful successor to the M24 Chaffee. Named for General Walton Walker who died in a Jeep accident in Korea, the Walker Bulldog was maneuverable and well armed. It was, however, rushed to the battlefield to counter North Koreaâ€™s Soviet built T-34s before all its own kinks had been worked out. Accordingly a number of Bulldog variants were developed over the years in an effort to overcome initial deficiencies. In 1953 a hydraulic turret traverse replaced the initial electrical traverse and in 1956, fuel injection was introduced. The U.S. Army began phasing out the Bulldog at the end of the 1960s, but the rugged vehicle has served more than 20 other countries and continues to operate in several armies around the world to this day. The detailed photographs that pack this volume offer readers a detailed look at all the facets of the M41, inside and out. In addition to comprehensive images of the outside of the Bulldog, five pages cover the engine compartment alone, while images of the interior of vehicle and turret fill 25 pages. Illustrated with 250 photographs plus color profiles and numerous detailed line drawings; 80 pages.