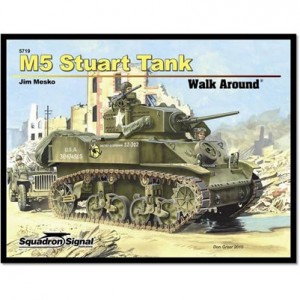 The light M5 Stuart tank was a much-upgraded version of the M3 Stuart. Na med for Confederate General J.E.B. Stuart, the Stuarts filled the need for a light tank and, in addition to the US, they were supplied to Allied military forces. The leap from the M3 to the M5 Stuart took place in 1941, when the US Ordnance Department accepted a proposal by Cadillac to install double Cadillac V8 engines in the tank and, after remodelling the hull to accommodate the new motors, a new tank, the M5, was born. Reconnaissance units in the front lines of US forces were always accompanied by the agile M5s. With a top speed of 45 miles per hour, armor protection, and firepower, the M5A1 provided powerful support. Though not a match for heavy German armor, the Stuart was more than adequate for dealing with infantry. In addition to the US military, M5s were supplied to Britain, the Soviet Union and France. After WWII, the Stuart saw action in such far-flung places as China, India, and Indochina. Illustrated with more than 190 photographs, plus color profiles and detailed line drawings; 80 pages.