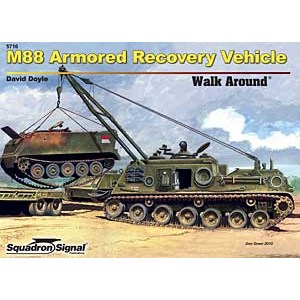 The M88 Armored Recovery Vehicle was designed and developed in the late 1950s to handle recovery of the heavier and more massive tanks that were appearing at the time. Armored like a tank and incorporating the suspension and drive train of the M48/M60 tanks, the M88 ARV is equipped with a massive winch and a hydraulically raised A-frame boom with 400 feet of 5/8″ wire rope. The M88’s original gasoline motor served the vehicle well during its years of duty in Vietnam. In the 1970s, though, a new diesel power plant was installed in the M88, which was then reclassified as an M88A1. Production for domestic use ended in 1989, but the vehicles continued to be manufactured for export. Meanwhile, a new recovery vehicle became necessary with the introduction of the massive M1 Abrams tank. The M88 had been so successful that it was taken as the basis for the new upgraded recovery vehicle, which is still in use today – the M88A2. Illustrated with 175 photographs, plus color profiles and detailed line drawings. Doyle; 80 pages.