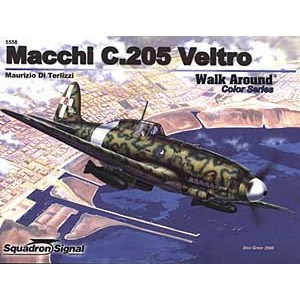 With Allied bombing raids increasing in 1942, Italyâ€™s High Command launched a competition for Serie 5 (5th series) fighters. Fitted with a German DB.605 engine, the sleek Macchi C.205s proved able to blast Spitfires out of the sky after they were introduced in November 1942. The addition of wing mounted 20mm in the spring of 1943 enabled the C.205 to take on American heavy bombers as well. Following the Itallian Armistice some C.205s turned their guns on Axis aircraft with success as well, even as Mussoliniâ€™s loyalists continued to fly the plane in the colours of the German-backed ‘Social Republic’ in the north. The Germans themselves took advantage of the fighter, temporarily equipping an entire Gruppe of JG77. After the war, modified C.205s went on to serve the Royal Egyptian Air Force during its 1948 war with Israel. Get a close-up look at one of WWIIâ€™s most aesthetically pleasing and innovative single-seat fighters! Illustrated with 225 photographs, colour profiles, and detailed line drawings; Di Terlizzi. 80 pages.