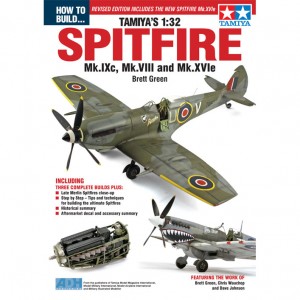 Although initially conceived as a stop-gap measure, the Spitfire Mk.IX (and the essentially similar Mk.XVI) eventually became the most numerous of all Spitfire variants with more than 7,000 delivered to the RAF, the VVS and other Allied air forces.

Premier Japanese model company Tamiya has released Spitfire Mk.IXc, Mk.VIII and Mk.XVIe kits in 1:32 scale. These three kits are simply superb in terms of detail, engineering innovation, fit and presentation. In the warm afterglow of their release, many modellers have declared Tamiyaâ€™s 1:32 scale late model Spitfires to be the some of the best scale model aircraft kits of all time.

This book details the construction of all three kits in step-by-step illustrated guides, and also suggests how Tamiyaâ€™s kit may be improved and describes the after market decals and accessories that are available for these magnificent models.

Now in stock and shipping