Panther and Jagdpanther Units in the East 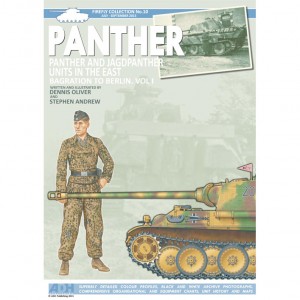 Firefly Collection No 10Â – Panther and Jagdpanther Units in the East Bagration to Berlin Vol. 1

In the battles to hold the Eastern Front, the Panther tank was perhaps the most important weapon in the Wehrmacht’s arsenal. Desperately switched from one crisis-point to the next, the Panther battalions of the Heer, Waffen-SS and the Luftwaffe were able to blunt the Red Army’s spearheads time and again and in 1944 the Panther’s body was used to create the best known tank destroyer of the war, The Jagdpanther. In this book, the 10th in ADH’s Firefly Collection and the first in a series, Dennis Oliver and Stephen Andrew examine these deservedly famous tanks and their crews.
Volume 1 includes
– Unit histories of the Army’s Panther battalions from Panzer-Regiment 1 to Panzer-Regiment 25.
– 13 pages of full colour artwork
– detailed tables of organisation and explanation of the KstN system
– black and white archive photographs and campaign maps

Volume 2 will complete the stories of the Panzer regiments and look at the Jagdpanther battalions with some lesser known users of this potent tank-killer while Volume 3 will cover the Panther units of the named formations, the Waffen-SS and the Luftwaffe.

ADH Publishing, in collaboration with The Oliver Publishing Group, presents the tenthÂ title in the Firefly Collection. Author and illustrator Dennis Oliver is joined in this title by renowned military artist Stephen Andrew.