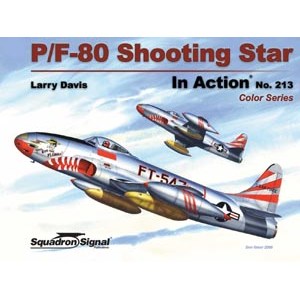 In 1941, the Chief of the Army Air Forces, General ‘Hap’ Arnold, saw a need for a US-designed jet aircraft. He instructed General Electric to begin developing a gas turbine engine and Bell Aircraft Company to build a plane around that engine. The result was the XP-59A Airacomet; but, it did not have the performance necessary to challenge Germanyâ€™s jet fighters. Previously, Lockheed had pursued jet development on its own initiative and was now given the go ahead to build its own jet airplane around a British designed engine, 203 days later, the XP-80 took to the air. The result would meet the USAAF requirements and would eventually become the P-80 Shooting Star. This book traces the development of the Shooting Star with more than 100 photos, colour profiles and detailed line drawings. Davis; 52 pages.