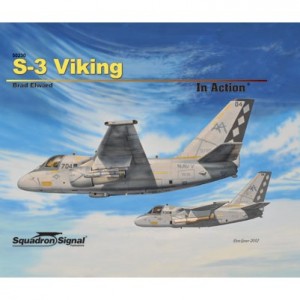 The Lockheed S-3 Viking was developed in the late 1960s to serve as a dedicated carrier-based anti-submarine aircraft. Over the years, it evolved into an outstanding surveillance and anti-surface platform, effective not only against submarines but also large and small surface ships. As its nearly 35-year career came to an end in 2009, the Viking also took on the carrier air wing organic tanking requirements, retiring with over half of its service life remaining. A total of 187 aircraft were built and served in 16 United States Navy squadrons. The Viking and its main variant, the highly-classified ES-3A Shadow electronic surveillance aircraft, played a key role in the Cold War and in the conflicts of the 1990s. The book is one of the few publications to tell the Viking story and is packed with photos and detailed line drawings, all depicting the aircraft’s weapons, paint schemes, sensors and interior. It also provides an overview of some of the more significant variants that were studied, but never fully pursued, such as the Carrier On-Board Delivery (COD) and dedicated (KS) refueling variants. It also discusses the aircraftâ€™s role in Operation Desert Storm and how the lessons learned from that conflict impacted the Vikings’ mission during the latter part of the 1990s and early 2000s. Illustrated with 186 photographs, line drawings, and numerous color profiles; 80 pages.