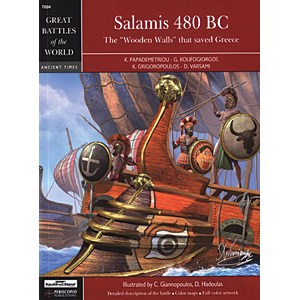 Great Battles of the World; Ancient Times. The ‘Wooden Walls’ that saved Greece – an historical essay about the naval Battle of Salamis that took place between the allied Greek naval forces and the Persian – Asian fleet. One of the most important military conflicts of the ancient world, as this monumental Greek victory actually led to the development of the ancient Greek values that gave birth not only to the European, but also to the whole of Western Civilization. Describes the trireme and especially its handling, its method of construction, its crew and its tactics. Includes the historical elements of the battle, a brief biography of the father of the great victory, Themistocles, and chapters from the Persian point of view as well. Also addresses the lesser-known details of the battle to assist in understanding the overwhelmingly difficult conditions under which the Greek fleet prevailed. Enriched with colour and b/w photos, maps and tactical movements and colour uniform plates. Koufogiorgos, Gregoropoulos, Papademetriou, and Varsami; 96 pages; English Text.